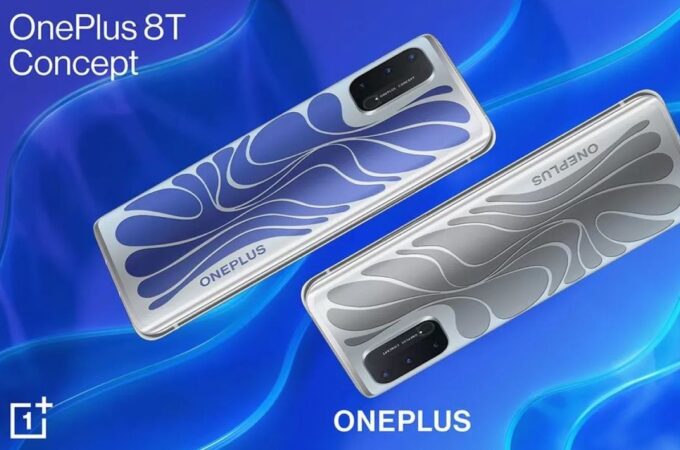 This past week OnePlus debuted a new version of the OnePlus 8T, known as OnePlus 8T Gaudi. It’s basically a concept version of the device, also an art installation of sorts. Its back side features a film that changes colors between gray and blue. The whole idea gets detailed below.

The new OnePlus 8T has a new electronic color, based on ECMF technology. It’s able to shift from dark blue to light silver and viceversa with ease. It involves a metal oxide inside the glass case activated by light electricity. It’s all about the application of various voltages and changes to the metal ions. The pattern on the back is inspired by the hot springs area in Turkey called Pamukkale.

It’s also tied in with the phone’s mmWave radar, so when the handset receives a 5G signal, it shifts color. This product is the creation of an artistic studio within OnePlus, with folks from New York, India, Shenzhen and Taipei involved. In the future ECMF could be used to monitor breathing, as the colors change in the rhythm of your breathing. We also have a sort of mmWave radar at the back, which detects objects and gestures in space and works in any sort of lighting, as a bonus from typical ToF or laser mechanisms.

It does sound a bit like the Pixel 4 radar enabled Motion Sense technology. OnePlus also unveiled another concept this year, the OnePlus Concept One, with electrochromic glass at the back, that makes the rear cameras disappear. That tech has yet to make it onto commercial devices, but I have a feeling the color changing film and mmWave radar may catch on faster.

About Kelvin
Passionate about design, especially smartphones, gadgets and tablets. Blogging on this site since 2008 and discovering prototypes and trends before bigshot companies sometimes
Apple Car Gets a Design From Concept Creator, Letsgodigital (Video)   Samsung Galaxy Z Fold 3 Dual and Tri Fold Design Exposed In Renders