PreCentral’s Palm design competition has generated some pretty appealing Palm concept phones, like the model below. Dubbed the Palm HD2 and created by LCGuy, this is just another attempt at creating the future Palm Pre, since the Pre 2 was considered a disappointment by some. 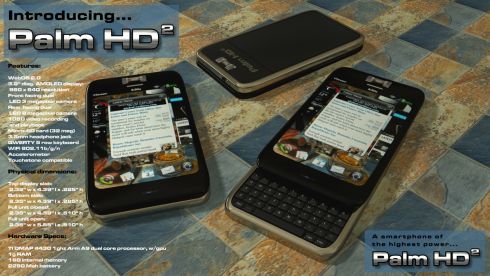 The handset relies on a TI OMAP 4430 1GHz CPU (ARM A9 dual core), 1GB RAM, 16GB of internal memory and a 2250 mAh battery. There’s also an accelerometer on board and we know that the device is Touchstone-compatible. What do you say?