Microsoft Xune, Portable Xbox With a Touch of iPod

A person who’s read the last year’s mobile industry news should know by now that portable consoles will become extinct in the next 5 to 10 years, being replaced by phones with the same features, if not better. However, while they’re here, those portable gaming devices still make gamers go crazy.

Just look at the Microsoft Xune concept below, a combination between Zune, iPod, Xbox and Sony Mylo. 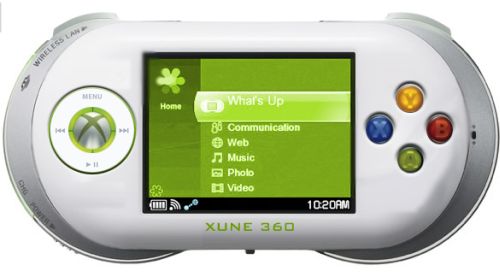 Basically we’re dealing with the Xbox 360 controller with a touch of Mylo and iPod Nano. The console also features shoulder buttons, a touchwheel with a center button (a la Xbox 360), a sliding keyboard and 4:3 ratio aspect ratio screen. The keyboard will be used for web surfing, email and chat, while the device is compatible with the Xbox 360 and Windows Media Center.

It seems that the designer of this concept console also thinks about a widescreen version. However, I’m already thinking about Skype on this beauty, some memory card support plus touchscreen and accelerometer. Here’s a video collection of all Xbox portable concepts so far: