We’ve just heard another rumour regarding the fact that Sony is preparing a PSP Phone and to go with it, we’ve got the following PSP concept, created by Won Chan Lee. The PSP Bugatti Veyron Edition was an assignment from a product design course in Seoul National University of Technology, with the result being the great idea created by this designer. 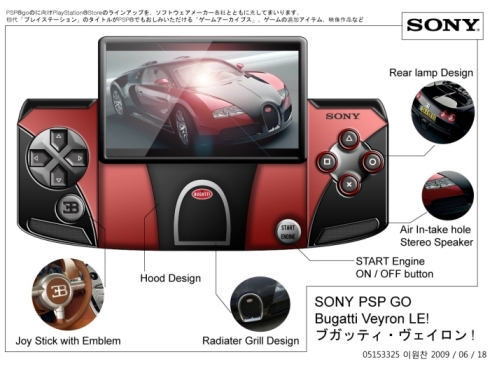 The students involved in this initiative had to create a special edition of the PSP, using Photoshop and Illustrator to make a 2D render that showcases the identity of Bugatti Veyron. This device is supposed to use a SDHC memory card, Bluetooth for multiplayer games (4 people max) and it also incorporates a 16:9 aspect ratio screen.

Won Chan Lee also mentions a new version of Gran Turismo bundled with the limited edition PSP. What do you say? Is it viable?

About Thrystan
Nokia 82 Dragonfly, Back to the Roots of Simple Design   Asus Net Fusion, the Graphic Design Tablet to Beat the iPad?