There’s a big fuss about gaming tablets lately, with Archos making one, the Wikipad getting delayed and other models being proposed on Kickstarter. Now Shaik Imaduddin, the creator of the Xperia Vita gaming phone shows us his vision of a Microsoft Xbox Tablet with a Surface twist to it. Meet the Xbox Surface: 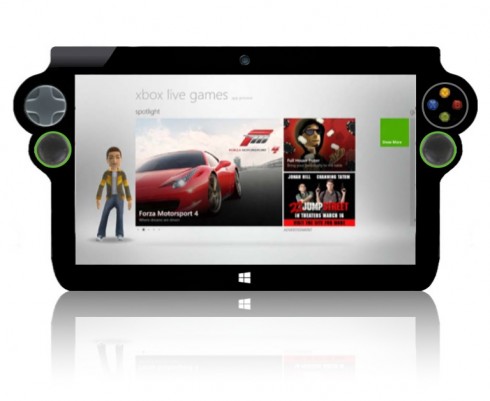 The Xbox Surface Tablet packs a 7.5 inch 1920 x 1080 pixel resolution display, a quad core Nvidia Tegra 3 processor and a custom GPU that offers you the power of a gaming laptop. Other specs include 4 GB of RAM, 64 GB of internal memory, a back 5 megapixel camera and front 2 megapixel camera. If this was a real Xbox tablet, it would definitely have a Kinect integrated, or something like it. It would also use SmartGlass to connect to Windows 8 PCs, Windows Phone 8 devices, Windows RT tablets and the Xbox 360 console.

The main idea of the design Shaik Imaduddin created is that we’re dealing with the basic Surface Tablet, but one that now incorporates gaming controls on the side. Thus, on the right side we have the D Pad and analog stick, while on the left there’s the other analog stick and the action buttons taken from the Xbox 360 controller. This week potential information about the Xbox 720 console leaked and it included a tablet, that somehow is related to a core unit, like the Wii U somehow… Do you think it will happen? Or is this version of Xbox 720 in “Surface mode” more likely?