I was complaining just the other day that we didn’t get to see cutting edge technology at CES 2013 and Samsung is here to prove me wrong. They did present a video showing flexible displays on a tablet and phone and you can watch that below. This is part of the Samsung CES 2013 keynote and speculations say that the Galaxy S IV or S V could have a Youm technology flexible display. 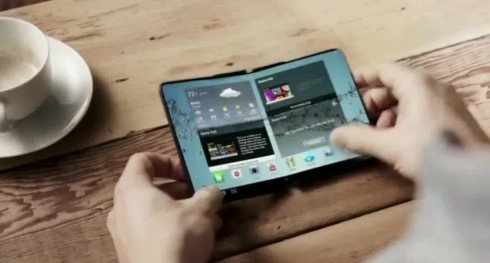 First we see a Galaxy S-style device, that can open up in two pieces and be turned into sort of a tablet. It’s sort of like a small booklet that you open up in order to use, as shown in the video. The interface is still TouchWizz and the device is incredibly thin. The concept of the video is rather puerile, since the girl is supposed to go with the guy who has the cooler toy. The douche with the tablet with lights around it is supposed to have an iPad, or what?

Anyway, at the end of the clip the futuristic flexible display tablet is shown as a main stick device with a sliding out flexible E-paper style screen, that displays the interface. It may be a 7 inch sheet that’s doing that, making this a very interesting tablet. We’re in for a long wait till this comes to mainstream production…

[Thanks Kevin for the tip]