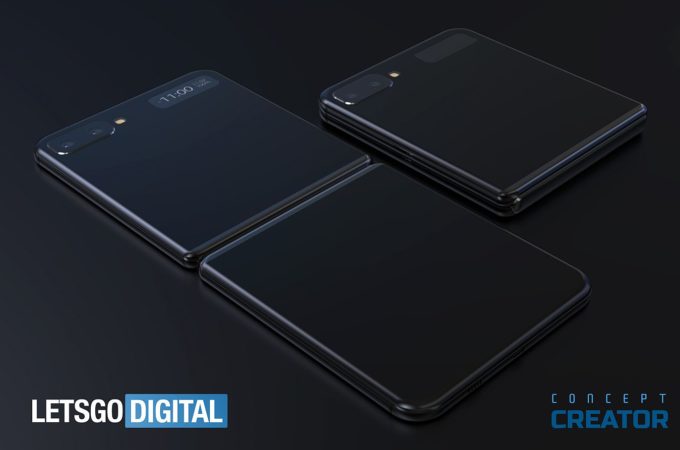 Samsung Galaxy Fold 2 has been leaked quite a bit recently, culminating with the specs that just appeared online. A bit before that we saw some renders popping up courtesy of Concept Creator and the lovely folks of Letsgodigital. Let’s check them out!

First of all, we already knew the format of the phone, so there are hardly surprises. The real novelty is the level of detail from these renders. The device stays a clamshell, much like the Moto RAZR 2019 and seems to adopt a more compact version of the hinge from the first Galaxy Fold. Samsung’s biggest goal would be to make the crease from the first model less visible this time around. Not sure they’ll be able to…

In these renders and the video below, the smartphone appears much thinner compared to the Moto RAZR 2019 and the first Galaxy Fold. The front camera has been cut in the screen, in a singular punch hole and the device hosts a dual back camera on the exterior shell. It also has a mini secondary screen for notifications. The most interesting trait here is that there will be a new type of protection for the screen, some sort of Ultra Thin Glass, which is less than 100 micrometres thick and should protect the displays better than the previous plastic iteration.

The latest leaked specs for the Galaxy Fold 2 mention a Qualcomm Snapdragon 855 CPU, in spite of us expecting it to pop up with a Snapdragon 865, as well as a 10 MP selfie camera and a 6.7 inch Dynamic AMOLED screen that folds. Last we heard this product was supposed to go around for $850 and it was supposed to be announced on February 11th.

Fold 2 should run on Android 10 in a combo with One UI 2.0. Its battery capacity is yet unclear, but we do know that one of the cells is 900 mAh in capacity.

About Kelvin
Passionate about design, especially smartphones, gadgets and tablets. Blogging on this site since 2008 and discovering prototypes and trends before bigshot companies sometimes
Samsung Galaxy S20 Ultra Pushes All Specs to the Max in Waqar Khan’s Vision (Video)   OnePlus Concept One Looks Very Convincing in Video Render