Among the names of designers we frequently publish there’s Rahul Sharma and if you click on his name you’ll see his previous works. Today he shows us a Samsung Galaxy S IV mockup, a design for 2013 with pretty realistic specifications. We’ll only handle part of the pictures and the design of the phone in this article and we’ll be back with more in Part 2. 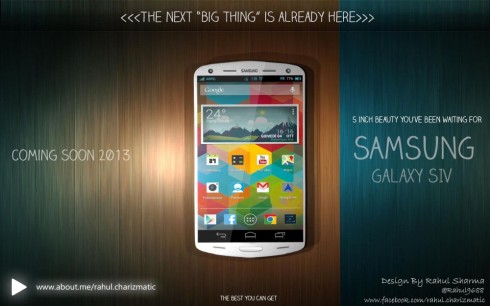 The device sports a polycarbonate body with a 7 mm waistline, so it’s slimmer than the Samsung Galaxy S III, iPhone 5 and Motorola Droid RAZR. It weighs 117 grams and runs Android 4.2 Key Lime Pie. An interesting idea that Rahul Sharma implemented is the touch control via scrolling sensors on the side for menu navigation. The device uses virtual Android keys and seems like a very wide unit, that would fit speculations saying the Galaxy S IV will have a 5 inch display.

In this vision it does have that diagonal, but also a HD S-OLED display with Full HD resolution and the option to switch between 2D and 3D displaying. The back of the smartphone is very simple and somehow reminds me of the Nexus 7, particularly if the line above the Samsung logo is a speaker, as I think it is. The Home button is till present, with a shape that reminds me of the Galaxy Note II and Galaxy S III. If you pay attention to the profile of the Samsung Galaxy S IV concept youll see the edges of the handset are slightly curved.

Also notice the gentle curve of the upper and lower part of the smartphone that ends in an almost pointy manner. Quite an interesting design and the only thing I don’t quite like is the back camera area. How about you?