27 year old S Mohammad Mehdi Azimi created this Samsung tablet concept and now he’s back with a Samsung Galaxy S IV design. The young man is from Iran and he’s passionate about industrial design. As you can see, this handset has a bunch of elements in common with the tablet the same designer created previously. 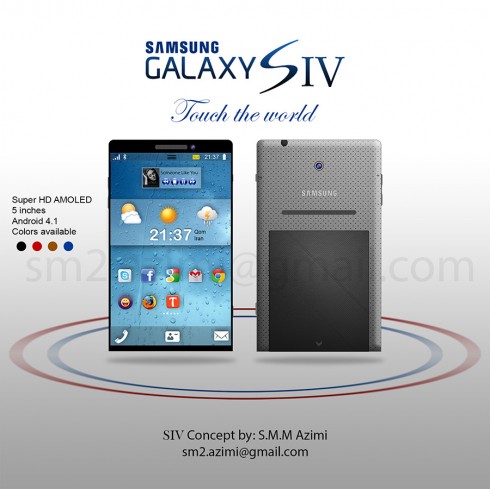 This Samsung Galaxy S IV concept features an edge to edge screen, that goes all the way to the side edge and upper/lower edge of the device. It has a more rounded upper side and a straight lower part, plus there’s no physical Home button this time. The smartphone relies on a Super AMOLED HD display with a 5 inch diagonal and has Android 4.1 as the OS, although we’re hoping for Android 4.2 on the real device.

The screen looks pretty crisp and the interface is original, not your average TouchWiz and also not the stock Android UI. The interface is very clean and well spaced and my only objection here is that with such small bezels the handset becomes very fragile. The back makes it look a bit like the Nexus 7, if you ask me… What do you think of this?