Shahin Jazirian imagined a new Samsung concept phone that goes by the name of Samsung Galaxy X and has midrange specs. That’s why I see it as a Galaxy Nexus successor, especially because it has a similar 4.65 inch diagonal and HD resolution. We’re dealing here with a handset with Super AMOLED display, a microSD card slot and 1 GB of RAM. 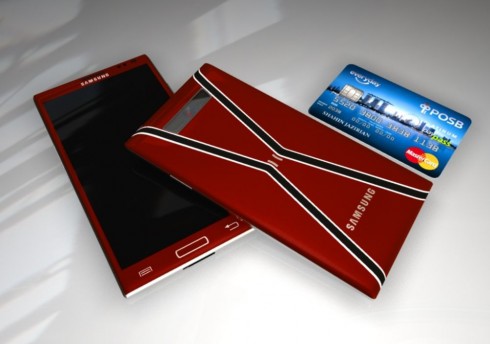 Samsung Galaxy X comes in 16 and 32 GB versions, it supports 21 Mbps HSDPA connectivity, as well as LTE and WiFi. Bluetooth 4.0 is also here, as well as NFC, microUSB 2.0 and there’s an 8 megapixel camera at the back, with autofocus, dual LED flash and Full HD 30 fps video capture. Upfront we’ve got a 1.9 megapixel and as far as software goes, Android 4.2 is the name of the game. The chipset powering up the device makes me think of the Galaxy Nexus again, since it’s a TI OMAP 4570, a dual core 1.7 GHz unit.

The GPU is a PowerVR SGX555 and we also get an accelerometer, gyroscope, proximity sensor and compass on board of the Galaxy X. As far as battery goes, the Samsung concept phone has a Li-Ion 2150 mAh unit, with 60 hours of functioning. As far as design goes, the device has straight edges, a cool X at the back and it’s pretty slim, plus it seems to have some sort of proprietary port at the bottom. Galaxy Nexus 2 much?

About Thrystan
HTC M7 Renders, Pictures and Leaks: Which One is Real?!   Sony Xperia Y Concept Doesn’t Stray Much From the Xperia Z, Enters Phablet Area