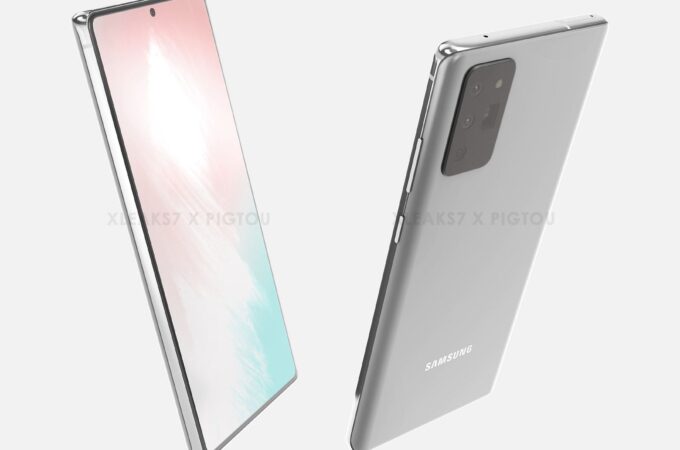 Samsung Galaxy Note 20 has leaked a bunch of times so far, but nothing truly major was revealed. Today we get the first “exclusive renders” from Pigtou and it seems to mirror the Galaxy S20 Ultra quite a bit. The renders were created through a collaboration with David from xleaks7 and there’s even a video of it below.

David’s source claims that Samsung is still working on parts of the flagship, so there are things that may change. To me this feels like a more angular and squared S20, with a bezel approach closer to the S10 Lite or Note 10 Lite somehow. At least symmetry is here and the chin is reduced. the source claims that the smartphone’s dimensions are 161.8 x 75.3 x 8.5 mm. The Note 20 is expected to be much bigger than the Note 10 and also closer to the Note 10 Plus.

This makes us wonder if the Note 20 Plus won’t be huge… oversized even. The Power button has been moved again with the volume buttons from the left to the right side, as they should. The handset has slim bezels and a 6.7 inch, the same diagonal as the S10 Lite, Note 10 Lite and S20+, plus A71. Samsung is still working on the camera, so we can’t confirm or deny its specs. The design of the cam feels closer to the S20+ to be honest, but with a twist of the huge module of the S20 Ultra. Lenses are big for sure.

I can safely say this design doesn’t surprise anybody and Samsung needs something special to entice buyers, particularly in almost recession times. The S Pen would have to up its AR and remote control game for sure. Improved zoom wouldn’t hurt, plus a better stabilized zoom, since the S20 Ultra got shaky after 30X.

About Kelvin
Passionate about design, especially smartphones, gadgets and tablets. Blogging on this site since 2008 and discovering prototypes and trends before bigshot companies sometimes
Vivo X50 Pro Gimbal Camera Phone Rendered and Specced   This Phone Has a Detachable Camera That Still Works Independently Like a GoPro