Erica Yusim sent us pictures of what seems to be a Samsung Galaxy Note 3 render, a pretty well thought device, that evolves from the idea of the two predecessors. First of all, it seems to have an edge to edge screen, then a more elegant Home button and then a bigger diagonal. 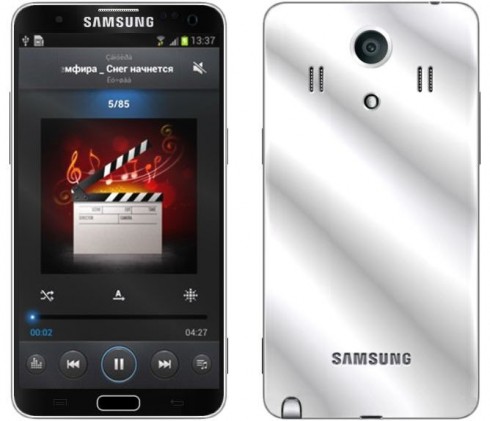 It also has a more squared format, leaving behind the rounded design of the Galaxy S III and Note II. Samsung Galaxy Note 3 features a 5.8 inch FHD Super AMOLED screen, a bigLITTLE processor, which means we have both a 2 GHz quad core processor (Cortex A15) and a quad core Cortex A7 1.4 GHz CPU. Basically, we’re dealing with an 8 core phablet, with 3GB of RAM, 32 to 128 GB of ROM and a microSDXC storage of up to 128 GB as well.

Android 5.0 Key Lime Pie is chosen here and a 4000 mAh battery powers up the device. At the back there’s a 13 megapixel camera, while upfront we use a 3 MP webcam. The whole thing measures 8.9 mm in thickness and obviously involves a brand new S Pen generation. From the comparison pics in this article, you can see that the Note 3 combines elements from the Note 1 and Note II, taking more from the first generation, if you ask me. I actually prefer a more rectangular design compared to the rounded one…