In less than two days Samsung will unveil the Galaxy Note 4 phablet, but till then we have time for one last concept of this device. It’s supposed to be a realistic one, inspired by the video teasers that Samsung has been publishing. 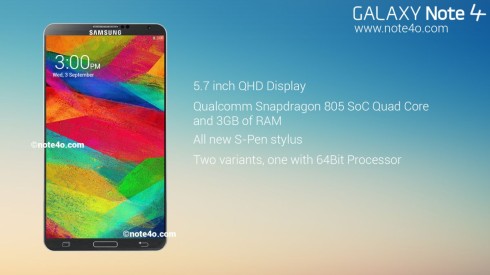 The device packs a 5.7 inch Quad HD display and relies on a Snapdragon 805 processor, accompanied by 3 GB of RAM. For those who don’t know, the Note 4 will be launched during the Unpacked Event Episode 2 in Berlin, at IFA 2014. It’s supposed to bring an upgraded stylus (all new S Pen), a narrower screen bezel and a very slim and long physical Home button. This phablet will have two versions, one of them with a 64 bit processor, apparently.

Odds are 99% that the device will have a plastic case, but there’s also a small chance we’ll get at least a metal part included in the chassis. Specs should also include a 16 megapixel cam with 4K video capture and we’re still wondering if the Retina scanner thing is happening or not. Is this the Note 4 you expected?

About Kelvin
Passionate about design, especially smartphones, gadgets and tablets. Blogging on this site since 2008 and discovering prototypes and trends before bigshot companies sometimes
iPhone 6 Air Rendered by Giorgio Tedoradze, a 2015 Design With iOS 9 (Video)   LG G4 Concept for 2015 is Pretty Much the G3 With Slight Upgrades (Video)