Hasan Kaymak has rendered a few very interesting concepts over the years and now he tackles the hit that will be released in the fall of 2014. I’m talking about the Samsung Galaxy Note 4, a device that people aren’t exactly talking right now, since they’re focusing more on the Galaxy S5. 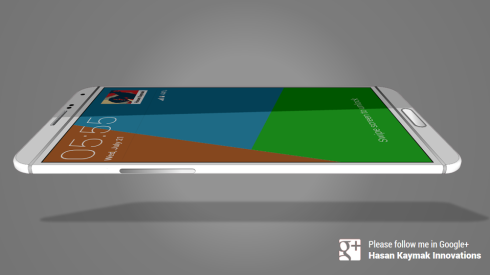 The phablet features a screen with a very small bezel, a big volume button and a singular physical button at the front. That’s the Home button and it looks wider than usual, plus I have a feeling it may integrate a fingerprint scanner. This is supposed to be the thinnest Samsung Galaxy phone ever and I seem to have spotted two metallic rings here, one at the top and one at the bottom.

We’ve got the usual stylus slot next to the microUSB port and I wonder if it’s a microUSB 3.0 or yet another new version. There’s the usual array of sensors at the top, next to the earpiece. The handset is elongated and doesn’t seem to be as massive as the previous Notes. I wonder if the screen will go past the 5.7 inch limit…