If you want a next generation phablet, the Samsung Galaxy Note III will satisfy your craving, but there’s a long waiting time till it launches. Well, till that happen we’ve got the concept below, created by Deepak Ahuja. 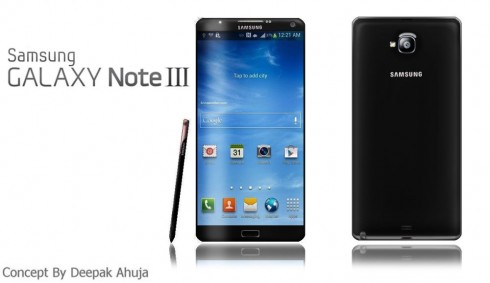 We’re dealing here with a 6.33 inch Super AMOLED HD+ Galaxy Note III, that seems to be a very elongated version of the Galaxy S II/Note 1, if you want. It’s like the original device was pulled and stretched and its bezels have been made almost non-existent. The S Pen also looks fancy and just like the Galaxy S IV rumors say, this device keeps its Home button.

Samsung Galaxy Note III has a specs list that includes a 1920 x 1080 pixel resolution and it relies on a 1.3 GHz Octa core processor, probably Exynos 5 Octa. At the back we’ve got a 13 megapixel camera with LED flash, while upfront there’s a 2.1 megapixel camera with BSI and CMOS sensor. The device offers 16/32/64 GB of storage, 3 GB of RAM and a 3600 mAh battery. I like this design, but this phablet seems huge to me. What about you?

About Thrystan
Apple iPhone X is a Beautiful Dream, by Bob Freking (Video)   Nokia K1-00 Phablet Uses a 5.9 Inch Display, Has a Very Cool Back Design