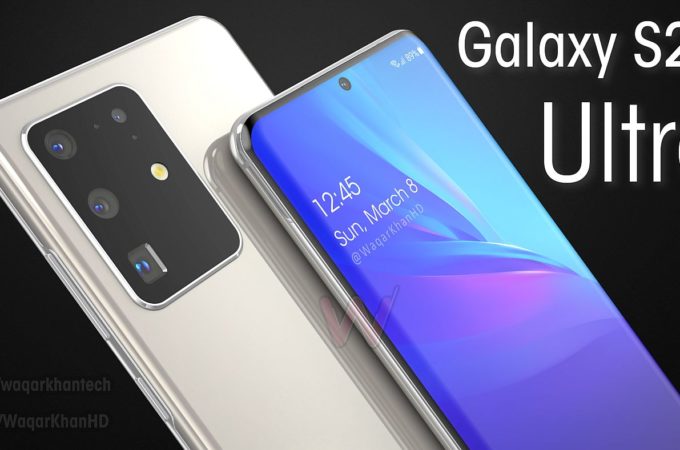 Samsung Galaxy S20 has been rendered to the gills and we’ve published our fair share of those renders. We actually did that more under the name Galaxy S11, to be honest… Now the accepted naming is Samsung Galaxy S20 to fit the year we’re at and there’s apparently a Galaxy S20 Ultra coming. Let’s see Waqar Khan’s vision of it.

First of all, the phone is a biggie, with a bit camera module, a rectangular one. The facade actually feels like a mixture of Galaxy S10 and Note 10. We also get a a Cardinal Red hue here, plus an Aura Glow follow-up and a pretty elegant black. The designer claims that Samsung used a mix of glass and metal for the body. It measures 8.8 mm in thickness and packs a gigantic 6.9 inches display. The front has a borderless, gently curved screen on the sides.

An in display fingerprint scanner is part of the package and there’s no trace of notch. There’s still a centered punch hole selfie camera like on the Note 10. Specs are rather impressive: Exynos 990 or Snapdragon 865, 6.9 inch 120 Hz screen, up to 8 GB of RAM and 256 GB of storage in basic config. There’s also a 4900 mAh battery, 108 MP main camera and 48 MP Periscope Zoom cam with 19x optical zoom and 100x hybrid digital zoom.

To those we add an ultra wide angle camera and ToF 3D camera. The cam does 8K 30 FPS video capture, 4K HDR 120 FPS video and all the goodies you’ve seen leaked: Video Spin, Bright Night, Director’s View and all that. The source, Windows United even throws out a starting price of $1099, plus the February 11th announcement and the March 6h store date. When I see that huge camera module at the back, all I can think about is that at least one of the sensors may get in the way and catch fingers in the shot.

About Kelvin
Passionate about design, especially smartphones, gadgets and tablets. Blogging on this site since 2008 and discovering prototypes and trends before bigshot companies sometimes
Xiaomi Mi 10 Rendered by Ben Geskin, Feels Like Redmi K30 a Bit   Samsung Galaxy Fold 2 Gets the Ultimate Detailed Treatment from Concept Creator, Letsgodigital