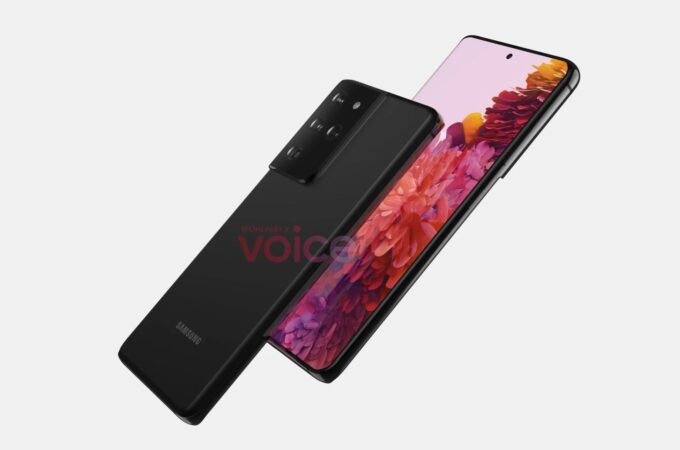 When the first Galaxy S20 Ultra leaks came out, everybody criticized its huge camera module. However, when it came out people started making up excuses for it: “it has personality, it has great optics” and so forth. We have to admit it was gigantic and made the device top heavy. Now the Samsung Galaxy S21 Ultra 5G has leaked, prematurely I might add and the camera module is huge again. We have renders and a video below.

Steve Hemmerstoffer aka @OnLeaks has published a 360 degree render video of the device, plus a few renders. Meanwhile Max Weinbach shared some early details about the Galaxy S21 Ultra camera setup. Over the past week we’ve heard two crazy theories about the Galaxy S21: it could debut in 2020 or in January 2021. We also saw the Samsung Galaxy S21 render a few hours ago and now it’s time for the S21 Ultra. The Ultra model is expected to have a Qualcomm Snapdragon 875 processor in USA and Exynos 1080 or 2100 in Europe and other territories.

It should have 12 GB of RAM or even 16 GB LPDDR5 of course, plus at least 128 GB or 256 GB of UFS 3.1 storage. On the software side, Android 11 and One UI 3.0 should be present here. Even though some people said we may go past 7 inches in diagonal, the render insists we’ll still get a 6.9 inch AMOLED curved side screen. A smaller chin and more minimal bezels are expected as well, plus a centered punch hole for the selfie camera. And the leaks keep coming: 5000 mAh battery, 65W charging and a thickness of 8.9 m.

About Kelvin
Passionate about design, especially smartphones, gadgets and tablets. Blogging on this site since 2008 and discovering prototypes and trends before bigshot companies sometimes
Oppo Find X3 Pro 5G Gets a Super Curved Display   Samsung Galaxy S21 5G Shockingly Gets Rendered Out of Nowhere, with Flat Display