Samsung Galaxy S22 Gets an Olympus Camera In This Render 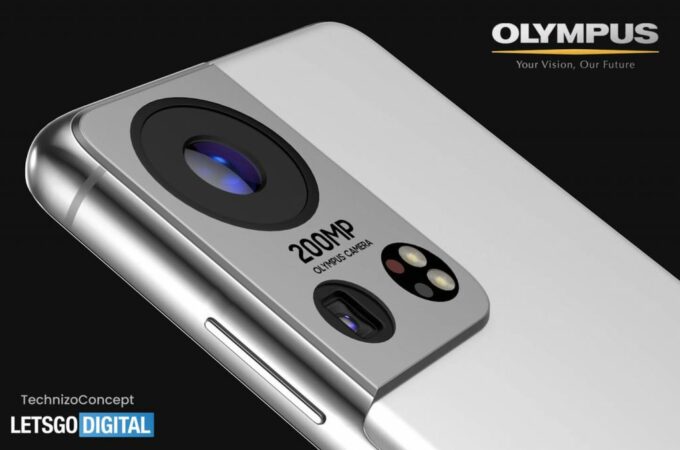 Letsgodigital, well better said Technizo Concept has rendered the device, complete with a huge 200 megapixel main camera and another camera below, which may be a telephoto or ultrawide unit with a liquid lens. There are other extra sensors in the small round circle with the LED flashes. Keep in mind that we’re supposed to see the Galaxy S22 here, not the S22+ or S22 Ultra. That explains the flat screen and the relatively small format. The sources talk about a periscopic telephoto camera below the main 200 MP shooter.

The extra large lens will capture a lot of light and a lot of details, but I feel that this megapixel rush should stop. People would rather have a gigantic 1 inch 12 MP sensor on a phone, to capture all the light it can, not a 200 MP shooter. Olympus is best known for image processing and color calibration, which is what they bring to the table in this supposed partnership. Olympus was a pioneer in the field of mirrorless camera and lenses.

The company and Kodak set up the micro four thirds standard years ago, making it a huge alternative to the DSLR. In June 2020 Olympus sold its camera business to a Japanese investment company, so they may be up to something. By the way, the firm announced it was ready to partner with non traditional companies recently… And back to the S22 a bit, its camera design is largely similar to the S21, but smaller in size.

About Kelvin
Passionate about design, especially smartphones, gadgets and tablets. Blogging on this site since 2008 and discovering prototypes and trends before bigshot companies sometimes
TCL Unveils Fold ‘n Roll: Foldable Phone That’s also Rollable and Becomes a Tablet   5 Amazing Reasons Why You Need a Phone Case