Samsung Galaxy S4 Through the Eyes of Designer Rahul Sharma

Rahul Sharma already designed a Samsung Galaxy S4 handset, but now he’s back with a new vision of the same device. He decided to redesign the smartphone because he received some advice regarding the first design, so he removed the physical button at the bottom. This reborn model doesn’t have any physical buttons, that are now replaced with a single touch sensor below the display, that will light up for notifications. 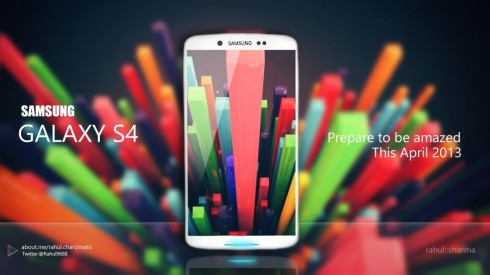 Samsung Galaxy S4 features in this case a 4.99 inch Super AMOLED display with 1920 x 1080 resolution and Corning Gorilla Glass 2 protection with oleophobic coating. It runs Android 4.2.1 thanks to an Exynos 5450 quad core processor with a Mali-T658 GPU, plus it comes with 2 GB of LpDDR3 RAM and a 13 megapixel camera with image stabilization and integrated S Vision. The latter is some sort of augmented reality system. We also get a 3600 mAh Li-Ion battery here, plus wireless charging, NFC, Bluetooth 4.0 and a new range of “S” features.

There’s S Voice 2 with autonomous voice control, S Vision, mention before and S Play, a new gaming hub for Samsung, plus S Surround, for audio experience. The interesting bit here is that the camera sensor on this Galaxy S4 is  a Sony Exmor R one, so Sony also contributes to this model. Rahul Sharma also seems convinced that the new smartphone will debut in April 2013 and not at CES 2013. I guess we’ll have to wait and see…