We’ve seen many Samsung Galaxy S4 concepts on this site, but the idea of an S4 Mini is fresh and new. Ben Ling imagined both, with the result being the image below. We’re dealing with a 5 inch S4, nothing unpredictable, a model with a Full HD Super AMOLED Plus TFT display, with Gorilla Glass 2 protection. 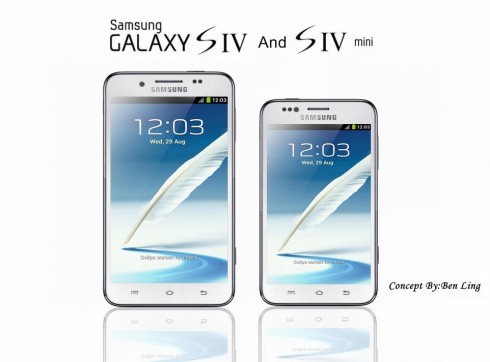 The Galaxy S4 Mini is a 4.55 inch smartphone, also with a Super AMOLED TFT screen, but a HD one. TouchWiz UI is present on both and both support multitouch with up to 10 fingers. The bigger S4 uses a quad core 1.9 GHz CPU, while the smaller one goes down to 1.5 GHz. At the back we have a 13 megapixel camera with LED flash and an 8 megapixel shooter respectively, both with 16x digital zoom and 1080p video recording. Other specs include Android 4.2 Jelly Bean, 2 GB of RAM, NFC, 16/32/64 GB of storage.

The Samsung Galaxy S4 specs include a Li-Ion 2500 mAh battery, while the S4 Mini adopts a Li-Ion 2100 mAh one. Finally we get LTE and a waistline of 9.1 mm and 8.9 mm respectively. The device is a bit less rounded than the S3 and features totally capacitive buttons below the screen, so Samsung has supposedly given up the physical Home button. Doable or not?