We’ve come across a new Samsung Galaxy S5 render, courtesy of the source mentioned below and this device seems to combine the design of the HTC One with the one of the Galaxy Note 3, if you ask me. We expect the new Galaxy S to debut in Q1 2014, maybe a bit after MWC. 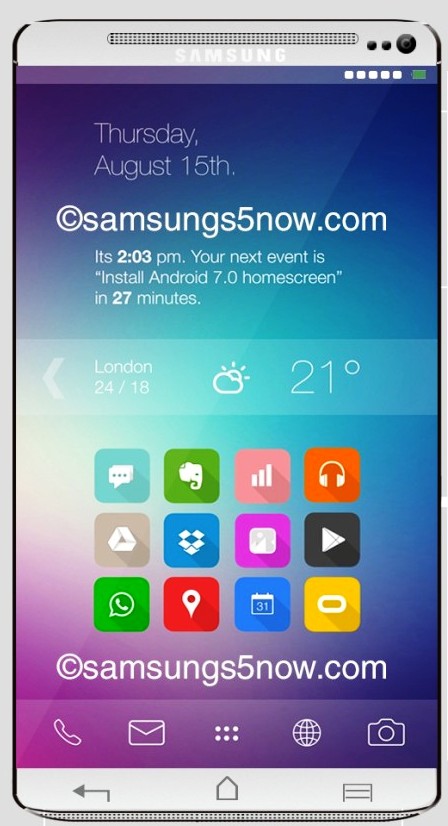 The rumors are saying that this smartphone will use an Exynos 6 processor with 64 bit architecture and a hex core processor cluster. There will also be a 4 GB RAM module on board and a Snapdragon 805 version of the handset with an Adreno 420 GPU. We’ll also get a 5.3 inch Super AMOLED screen with a resolution of 2560 x 1440 pixels and a 16 megapixel camera with optical image stabilization.

4K video recording will be here and apparently the Home button will become virtual or capacitive. The TouchWiz UI will be totally redone and applied on top of Android 4.4 KitKat. There seems to be pair of speakers here, at the top and bottom front of the device, just like the HTC One. Do you think this design would work?

About Kelvin
Passionate about design, especially smartphones, gadgets and tablets. Blogging on this site since 2008 and discovering prototypes and trends before bigshot companies sometimes
Windows Phone Notifications and Toggles Rendered by Reid Swan   iPhone 6X Render Explores the Mathematics of a 4.8 inch Screen