Tobias Hornof sent us one of his designs, the Samsung Galaxy S5 concept, that’s shown below. 6 years ago, Tobias created the Nokia 8900 render, that was reasonably famous in its day and now he’s back with a fresh flagship. 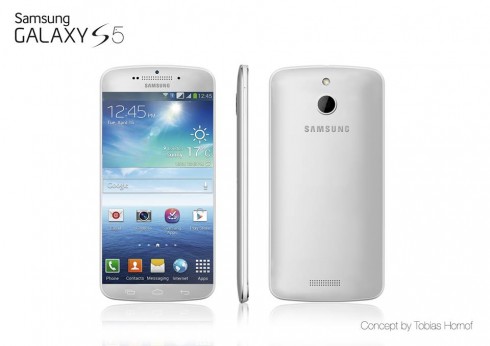 This is a clear evolution of the Galaxy S design, with an edge to edge screen, a narrower case and what seems to be a capacitive Home button. The Samsung Galaxy S5 concept here feels like an unibody design and we also get a pretty slim waistline and discrete camera at the back. The device has a 64 bit processor, 32 or 64 GB of storage, a 16 megapixel camera with dual flash module and an 8 megapixel front camera.

We’ve got Android 4.4 or a certain “Samsung OS” on board. As speculated before, this Galaxy S5 has an aluminum unibody design and a touchpad that includes a fingerprint sensor. Below you can see a comparison between all the Samsung Galaxy S models launched till now and I have to say that the Galaxy S II still looks pretty… but the S5 is clearly the most evolved.

About Kelvin
Passionate about design, especially smartphones, gadgets and tablets. Blogging on this site since 2008 and discovering prototypes and trends before bigshot companies sometimes
Sony Xperia Edge is a 5 Inch Smartphone With Android 4.4, Too Much RAM   Curved Samsung Galaxy Phone Leaks, May Just be the First REAL Flexible Handset