Samsung Galaxy S5nx Feels Like a Plastic Toy, Is Just a Render

Rixxan Z has sent us what looks like a plastic toy, but it’s in fact a Samsung Galaxy S5 with slight specs upgrades and design downgrades. It gets what seems to be a cheaper case and a variety of colors for it, including pink and mauve. 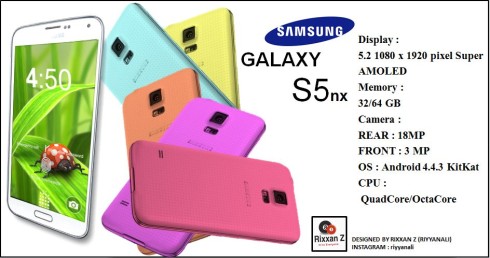 The name of the Samsung concept phone is Samsung Galaxy S5nx and it keeps the general lines of the S5, the major ones. It specs include a 5.2 inch Full HD display with Super AMOLED panel, 32 or 64 GB of storage and an 18 megapixel camera, up from the standard 16 MP. The front camera is a 3 MP shooter and the OS is Android 4.4.3 KitKat.

Such a product is pretty strange, since the case of the Galaxy S5 is already plasticky and making it more so may decrease its appeal. A metal case, I get it and also I get the fact that HTC wants a plastic M8, but why would anyone want an even more plasticky and toy looking S5? Why?!

About Kelvin
Passionate about design, especially smartphones, gadgets and tablets. Blogging on this site since 2008 and discovering prototypes and trends before bigshot companies sometimes
LG G3 Gets Rendered Realistically, Specs Also Included   New iWatch Design Brings Us Back the Basics of a Watch