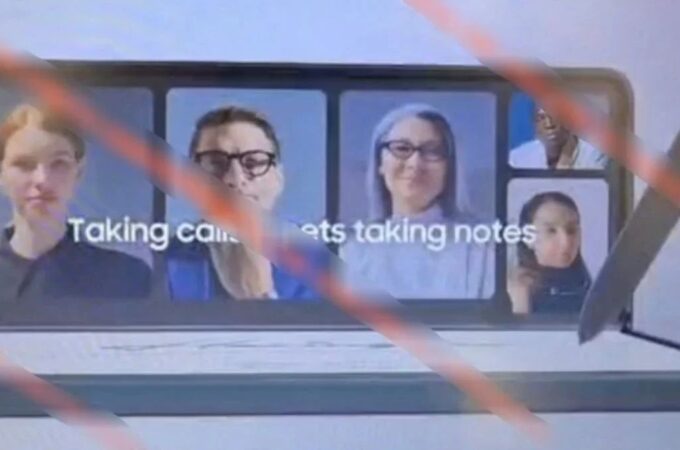 Turns out that the new foldable will have an under display camera, which has been rumored for Samsung devices for the past 2 years. Samsung did make some design changes for the Galaxy Z Fold 3, which oddly enough doesn’t seem to borrow many elements from the Galaxy S21 series. For example, the camera module wrapped around the top left corner is nowhere to be seen. The source of the images? Apparently the Samsung marketing department, since these are marketing materials.

The S-Pen support is also confirmed, which was expected, since the Galaxy S21 Ultra also got it. The promo materials show us how easy it is to jot down notes with the stylus while performing a video call. Rumor has it that the Galaxy Z Fold 3 will be a hybrid S Pen, which doesn’t have a fine tip, in order not to damage the foldable screen. However, we are expected to get a new UTG layer, which will take S Pens in a better way. Samsung also patented something called “Armor” for the display, hinge and bezel, making them tougher.

The outside also gets Gorilla Glass Victus protection. The phone also sees to have 3 lenses at the back for the main camera, with a very small camera island and the LED below the cams. Gaps between the two screen parts are now gone, as we’ve seen on the Huawei Mate X2 recently. A new 90 degree angle usage is also shown, a sort of laptop mode.