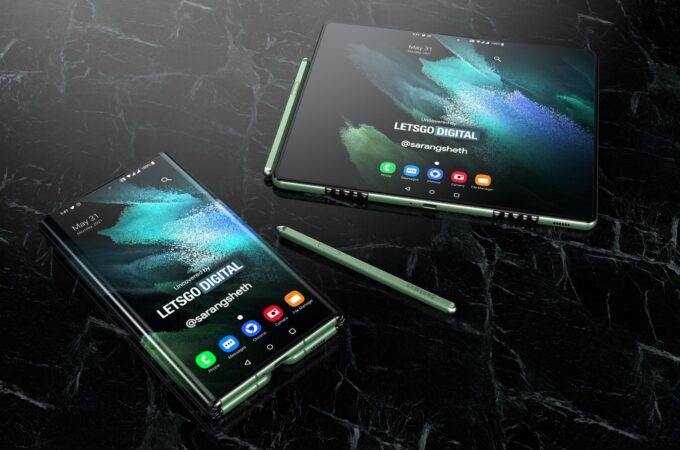 I must admit I’ve missed the classic Letsgodigital renders, but now the Dutch side and its partners are back with a new type of device. Meet the Samsung Galaxy Z Tab Fold, which has a double hinge, able to fold in two directions. The device folds out into a tablet and has S Pen storage.

We’re no stranger to innovative Samsung foldables, as the company, or better said Samsung Display showed off some unusual new foldable panels at the SID 2021 event. One of them was able to fold in two spots and sported two hinges, going from smartphone to tablet pretty fast. The design shown here is created by Sarang Sheth, editor in chief of Yanko Design, another site we’ve followed for many years and we recommend you also do that, because they cover industrial design in a pretty useful manner.

Back to the renders, as you can see the S-Pen is placed at the back side, right where the two foldable pieces meet. The stylus design is closer to the bigger one from the Tab S models, not the slimmer one from the Galaxy Notes. The design closely follows the Samsung Electronics patent that was filed recently. The documents talk about a flexible screen that can be folded inwards and also outwards. Outwards expands the diagonal, useful for gaming and and video watching, while inwards makes the device more compact and easier to carry. A multi foldable eliminates the need for a cover display.

A wider hinge would be needed to fold the device in two directions, which may make the device more massive. Believe it or not, Xiaomi was showcasing a dual folding prototype phone as early as January 2029. Samsung seems to be taking on the challenge now. If we start to think about it, it would make more sense for a dual hinge tablet to be launched first and only after that a dual hinge phone. I’ve said it before and I’ll say it again: more hinges mean more potential breakage points and we’re definitely going to have to learn how to behave with such a machine.

More details can be found in the source link below.

About Kelvin
Passionate about design, especially smartphones, gadgets and tablets. Blogging on this site since 2008 and discovering prototypes and trends before bigshot companies sometimes
Samsung Galaxy Z Flip 3 Gets An Introduction Video   iPhone 13 Rumored to Come in Rose Pink, Rendered by Artist