Suman Chatterjee sent us a render of a rumor we’ve heard in the past: a Sony made Google Nexus 5 smartphone. At some point LG was rumored to make the Nexus 5, but seeing how the Nexus 4 was not exactly a hit, it’s either Motorola or Sony if you ask me. I sure miss a HTC Nexus, but that’s not happening anytime soon, from what I know. 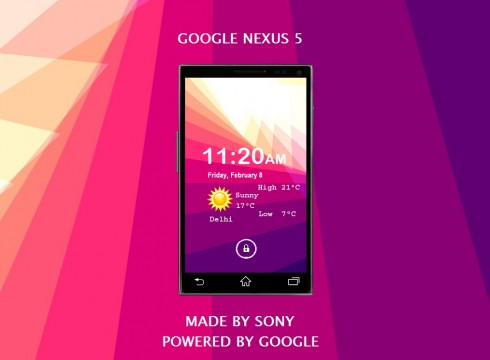 So this is a Sony Nexus handset, one with a simple rectangular design and one that needs to correct everything that was wrong with LG Nexus 4. First of all, it runs the new Android Key Lime Pie, then it has 3 capacitive buttons below the display and probably a Full HD screen with a 4.7 inch or 5 inch diagonal. I guess that it has either a Tegra 4 CPU inside or maybe a quad core Snapdragon S4 Pro, but in a more evolved generation. I also expect the top notch imaging technology from Sony to be felt, through a 13 MP or even 16 MP camera with Exmor RS sensor.

Finally, 2 GB of RAM and 32/64 GB of storage without microSD are welcome. I want to get rid of the glass back of the Nexus 4, to get rid of the low display brightness on the Nexus 4 and keep the reasonably good battery. Also, I haven’t told you this before, but I frankly do not like the camera UI in Android 4.2. Who’s with me?