We’ve just received a brand new Sony Xperia concept phone from Janish Kolakkattil, who envisions the device like some sort of Samsung and LG hybrid, at least in my opinion. The Sony Xperia N1 is the name here and this model runs Android 4.4.2 KitKat. 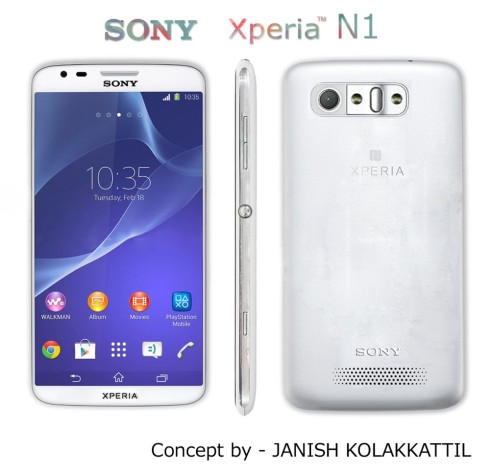 We’re dealing with a smartphone with pretty modest specs, that include a Qualcomm Snapdragon S4 Plus dual core 1.5 GHz CPU, an Adreno 440 GPU, 8 GB of storage, a microSD card slot, accelerometer, gyroscope, proximity sensor and compass. The display is a 4.5 incher with 1280 x 720 resolution and the usual X Reality Engine technology.

We also get 4G connectivity, dual SIM slots, NFC and microUSB 2.0 with MHL support. There’s a 13 megapixel back camera in the mix with dual LED flash and a front 2 MP shooter, while the battery is a 1850 mAh unit. The Xperia N1 comes in white, black, red, purple and yellow and it seems to have a dotted back, that looks a bit plasticky, with a slight Samsung vibe to it.

I can’t really tell if we’ve got a button between those flashes or some sort of other camera gear. I can see that there’s a Power button on the side, so that’s crossed off the list…