Ben Ling is back at it again, designing Sony Xperia handsets, this time with a model that could easily rival the Samsung Galaxy S III. After all it has the same diagonal size and a quad core CPU. Sony Xperia TL is pictured below and comes with a 4.8 inch Full HD TFT screen with shatter proof protection and also resilience against scratches. 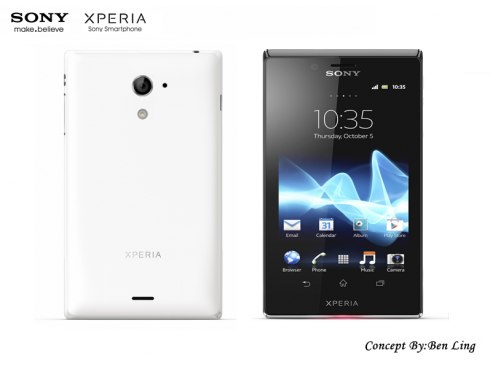 At the back we find a 14 megapixel camera with LED flash and Exmor R sensor, plus 16 x digital zoom and full HD video recording at 1080p. Xperia TL has a front 2 megapixel camera with 1080p capture as well and inside there’s a quad core Snapdragon S4 Pro 1.5 GHz processor, that should be more powerful than the Exynos quad on the Galaxy S III. There’s also an Adreno 225 GPU in here, NFC, 1 GB of RAM and 16 GB of storage. This new Sony Xperia concept measures 7.8 mm, so it’s pretty thin, but not as thin as the Motorola Droid RAZR, at 7.1 mm.

It runs Android 4.1 Jelly Bean and uses Sony technologies like xLOUD and Sony Mobile Bravia Engine 2. Finally the specs list is rounded up by a Li-Ion 1910 mAh battery, Bluetooth 4.0 and a microSD card slot. The handset weighs 125 grams and its design is rather strange, since it seems like a much smaller phone than the specs describe. It could end up being very wide…