A young designer from Japan has imagined the way the Sony Xperia Z3 is going to look like and used good old pen and paper to turn imagination into a concept. The concept is called “My Ideal Xperia 2014”, but it’s also dubbed the Xperia Z3. 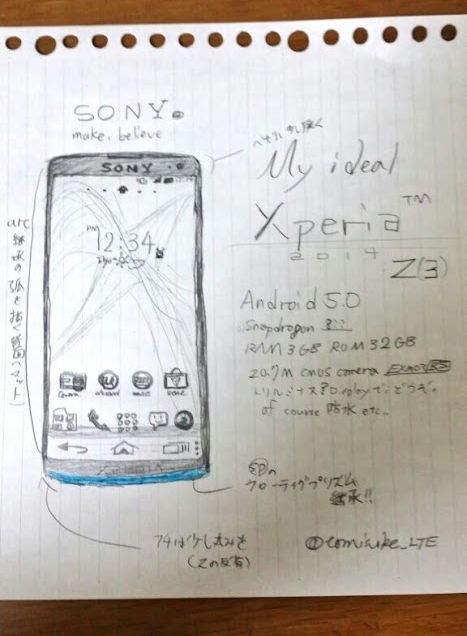 There are even a few specs included, like Android 5.0, a mystery Snapdragon CPU and 3 GB of RAM. 32 GB of storage are also here, plus 20.7 MP CMOS sensor camera with Exmor RS tech. 4K video capture should also be here and since the lower blue bar stands out so much, I’m thinking it can light up in various colors.

The handset seems elongated, but it’s a bit less wide than what I’m used to on Xperias. I can’t really say if we get capacitive or virtual buttons, but the latter is pretty much a given in the modern world. Seeing how the specs are very similar to the ones of the Xperia Z2, I’d say we take them up a notch and include a 5.2 inch 2K display and a Snapdragon 900 CPU (futuristic).

About Kelvin
Passionate about design, especially smartphones, gadgets and tablets. Blogging on this site since 2008 and discovering prototypes and trends before bigshot companies sometimes
Nokia Lumia Phone of 2020 is Flexible and Fits in Your Wallet   HTC One Ultra Tablet Envisioned by Rohit Singh