If the leaks regarding Sony Xperia Z3 are true, you can forget about IFA 2014 and the launch of this phone. It’s basically the Xperia Z2 with rounded edges… and perhaps a new camera sensor, but the same resolution. Also, the screen may jump to Quad HD, but what’s the use if it’s a TFT? Anyway, some of us are more optimistic, like Victor Cao, who rendered the Sony Xperia Z4 below. 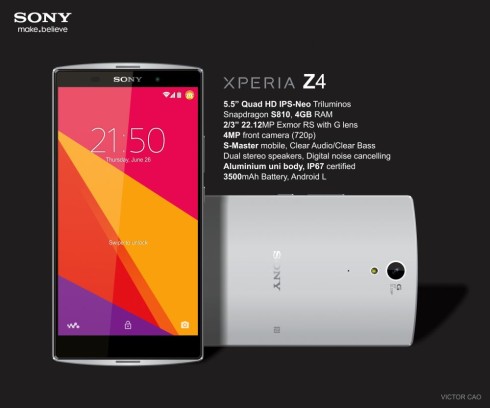 This one is a phablet level handset, with a 5.5 inch Quad HD display, that uses Triluminos tech and also an IPS-Neo panel. Inside there’s a Snapdragon 810 processor, 4 GB of RAM and a 3500 mAh battery. Android L (or whatever comes next) is available as the OS and we’ve also got a 2/3 inch 22.12 megapixel Exmor RS camera with G Lens and a front 4 megapixel camera with 720p video capture.

The Sony Xperia Z4 concept features dual stereos speakers, a trend started by the Z2 actually and it also has digital noise cancelling. Its body is made of aluminum, uses unibody design and it’s water and dust resilient. I have to say I’m liking the idea, but what’s the deal with the straight edges? If the Xperia Z3 goes round, won’t the Z4 do it as well?

About Kelvin
Passionate about design, especially smartphones, gadgets and tablets. Blogging on this site since 2008 and discovering prototypes and trends before bigshot companies sometimes
LG G4 Concept for 2015 is Pretty Much the G3 With Slight Upgrades (Video)   Moment Smartwatch Goes From Prototype to Preorder Fast