Rendered by Ben Ling, the latest Sony Xperia concept phone is shown below and it’s dubbed Sony Xperia ZL3. We’re dealing with a device that’s basically a derived version of the Sony Xperia Z3. It comes with a 5.2 inch Full HD display, with an IPS panel and Sony Live Color LED tech. 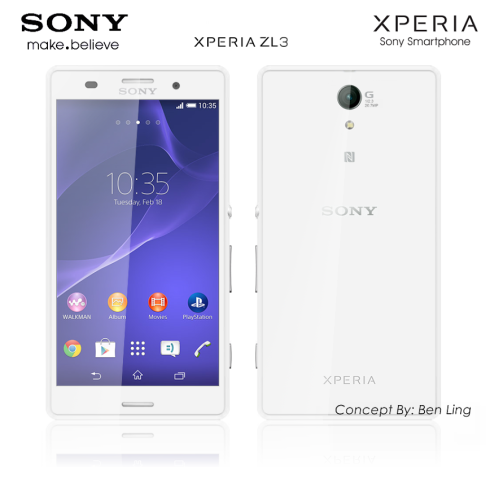 The Xperia ZL3 has a 20.7 megapixel camera at the back, LED flash and a 1/2.3 inch sensor. It does HDR and has an Exmor RS sensor at the back, plus BIONZ technology. The device supports 8x digital zoom and also supports 4K video capture. Inside there’s the overused Snapdragon 801 quad core CPU, as well as 3 GB of RAM. This concept phone offered features like PlayStation Certification, X Reality for mobile and other Sony Xperia perks.

It measures 7 mm in thickness, weighs 147 grams, supports 4G LTE and has 16 GB of storage. Android 4.4.4 is the OS here and we’ve got a physical camera button, dual stereo speakers, noise cancelling, xLOUD tech and a 3300 mAh battery. Sony Xperia ZL3 is waterproof and dust proof and it adopts the same basic design that you guess for an Xperia device with your eyes closed: rectangular slab of plastic/metal with angular edges.