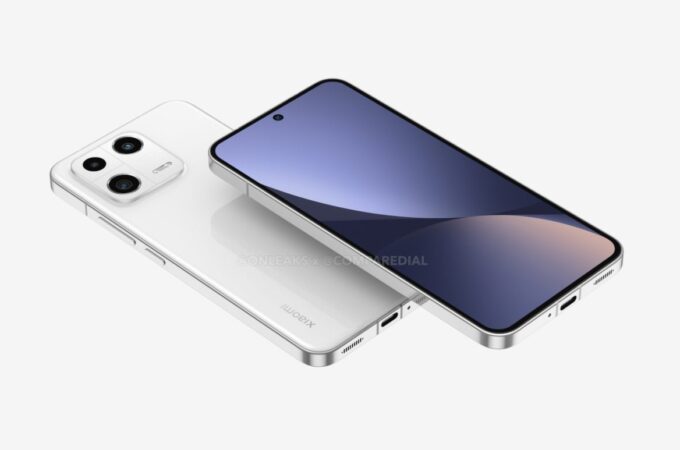 Xiaomi 13 is coming pretty soon, possibly even this month, considering its CPU is also on the horizon. As you probably know already, Qualcomm is going to unveil the Snapdragon 8 Gen 2 processor on November 14th and soon after we’ll get to see the first phones with it on board. Today we also catch a glimpse of the Xiaomi 13 and 13 Pro in fresh renders.

These are renders made available by CompareDial and OnLeaks, being as legit as they come. Turns out that the Xiaomi 13 will have an iPhone vibe, as it comes with flat sides and a flat screen. It’ll also adopt a camera module that feels a bit like the one of the OPPO Find X5. We see the same lines between sensors as the Xiaomi 12 series had. There’s also a screen with narrow bezels and the ever present punch hole selfie camera.

To fight off a bit of the iPhone resemblance, the device has a slight curve of the glass at the back. Apparently, that helps with the grip. The source reveals that the device will measure 152.8 x 71.5 x 8.3 mm and its camera bump will take the thickness up to 10.3 mm. The Xiaomi 13 Pro has a curved screen, a smaller punch hole and a bigger camera module, with 3 bigger lenses. Leica tuning and optics are to be expected. Xiaomi 13 Pro is also said to have a 6.7 inch AMOLED E6 screen with a 2K resolution and 12 GB of RAM, as well as 256 GB of storage.

Expect a debut outside China around March 2023. Also expect a Snapdragon 8 Gen 2 CPU and very fast charging, like 120W.

About Kelvin
Passionate about design, especially smartphones, gadgets and tablets. Blogging on this site since 2008 and discovering prototypes and trends before bigshot companies sometimes
How to Manage Photos on Samsung Galaxy S21 5G   What Is The Role of Hands In Poker