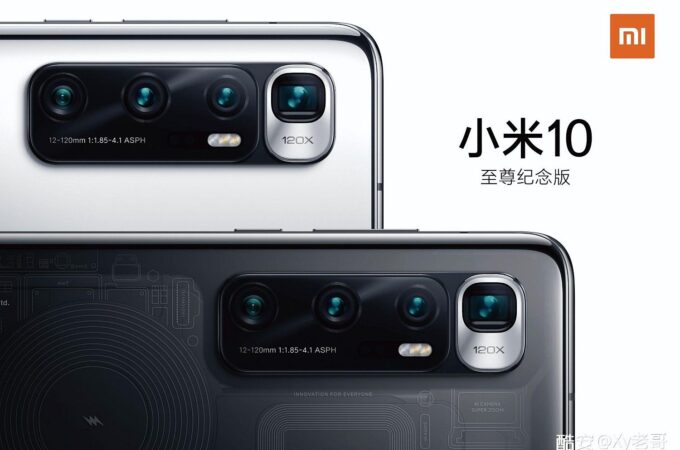 One flagship doesn’t seem enough nowadays and most companies are launching two or even three a year. Case in point Xiaomi isn’t happy with just the Mi 10 Pro and it’s preparing the anniversary and ultra limited model Xiaomi Mi 10 Ultra. That name was confirmed by a Xiaomi official recently and now we also get solid leaks of renders and posters below.

The renders were posted on Twitter by Bhuvnesh Bagri, with a very high accuracy rate. It would appear that we’re about to get a camera with 120X zoom, as rumored for the Xiaomi Mi CC10 Pro in the press for a month or two. There’s a periscope camera within a quad cam shooter, that probably also includes a 108 MP sensor and a ultrawide cam, plus another telephoto camera. We also learned from other sources that the Xiaomi Mi 10 Ultra will inaugurate a selfie camera integrated under the display.

Another batch of rumors point to a transparent back version of the device, as well as a potential ceramic white one. Mi 10 Ultra should also bring 100+ W charging, 16 GB of RAM and it could end up being a total beast. Improved vapor chamber cooling should also be in the mix, plus HiRes acoustics and a next gen fingerprint reader. By the way, if I’m not mistaking, this is the first Xiaomi phone with a 120 Hz refresh rate, if you don’t count the gaming phones.

Expect a hefty price and a launch on August 11th.

About Kelvin
Passionate about design, especially smartphones, gadgets and tablets. Blogging on this site since 2008 and discovering prototypes and trends before bigshot companies sometimes
OnePlus Aurora is the Next OnePlus Midrange Phone That Looks Better Than Nord   Huawei Mate 40 Pro Renders Are Here; Phone Feels Like Hybrid of P40 Pro, Mate 30 Pro