After major sites like Huffington Post and Forbes reported on Apple’s intention of releasing a cheap low end iPhone in the next 3 years in order to counter Samsung, now it’s the turn of designers to imagine what this iPhone would look like. And the renders are pouring in… Today we’re showing you an iPhone Mini created by Diego Alejandro Hermoza Llanos. 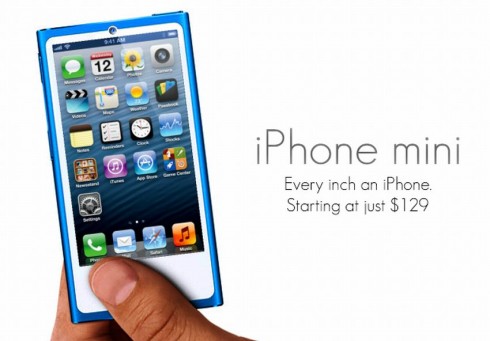 The handset is “every inch an iPhone” and it’s supposed to start at $129 and adopt a bit of the design format of the latest iPod nano. We don’t have any specs, but we can speculate. What I like most about it is the very discrete front camera integration. I can imagine this being a 3.2 inch iPhone or maybe even a 3 incher, although the number of icons on the screen is impressive. The iPhone Mini concept may have to run a dumbed down version of iOS or have the minimum required specs to run the latest iOS for at least two years.

I imagine that some dual core Apple AX processor would be enough, as well as 512 MB of RAM and the resolution should be around HD level. A battery that provides a day of use would be decent, as well as a 5 MP iSight back camera and a HD front FaceTime camera. We also expect a fantastic waistline, maybe lower than 7 mm, considering how thin the device looks. Is there room such an iPhone Mini out there?