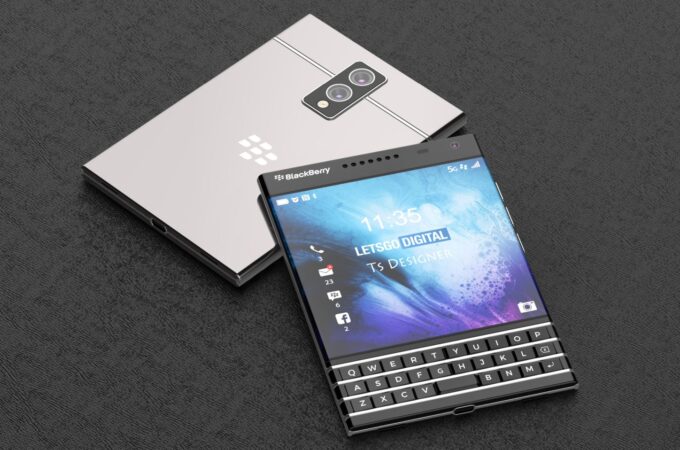 BlackBerry has become a mere shadow of itself, the brand formerly beloved and promoted by Barack Obama at some point. Sadly, the company bounced around from one owner to the other and got from TCL to Onward Mobility. It’s now supposed to be working on a 5G smartphone and we have a render of it, courtesy of Letsgodigital. Meet the BlackBerry Passport 2 5G.

The device keeps the wide format of the predecessor and also adopts a 3 row QWERTY keyboard. The creation of TS Designer, this concept brings back the iconic design from back in 2014. There’s a square 4.5 inch screen here and a well spaced QWERTY keyboard below the screen. We also have golden accents for an extra touch of elegance. The OG Passport came with a single back camera and also a single front cam.

Now there’s been an upgrade, as we get a dual back camera, but no resolution is mentioned. I can bet on 64 MP or 48 MP for the main camera and also an 8 MP telephoto or ultrawide shooter, maybe 13 or 16 MP in res. The facade has narrower bezels and the device’s keyboard rows are separated by slightly lifted breaks, helping ergonomics. The device is also IP certified.

Expect Android 11 or 12 on board and also a beautiful red version pops up in the video concept below. BBM should be here, plus the usual extra security features. Hopefully, the price is closer to the real midrange identity of the device and not its former flagship glory.

About Kelvin
Passionate about design, especially smartphones, gadgets and tablets. Blogging on this site since 2008 and discovering prototypes and trends before bigshot companies sometimes
Redmi 10 Leaks in Specs and Pictures Via Retailer   Top Advantages Of Obtaining PMI PMP Certification