Braille Mobile Phone, Made in India 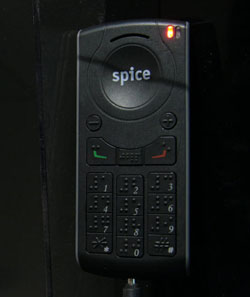 This is one original piece of work, courtesy of the Indian phone maker Spice, that developed this device, ideal for the visually impaired. It’s been introduced at the Mobile World Congress 2008 and the manufacturer kept it simple and used low tech, obviously not including a screen. The cellphone’s keypad uses Braille and voice technology to inform the visually impaired user about the number he’s dialing. Since this “Braille Phone” lacks a display its battery life has been greatley prolongued, lasting 400 hours in standby and providing 4 hours of talk time.

The phone also features 2 LEDs, a red one that signals the low battery status and a blue one showing the status of the network connectivity. Spice’s device weighs 70 grams and measures 105 x 45 x 15mm and it should be available for a more than decent price, $20, but not on the iPhone-craving markets.