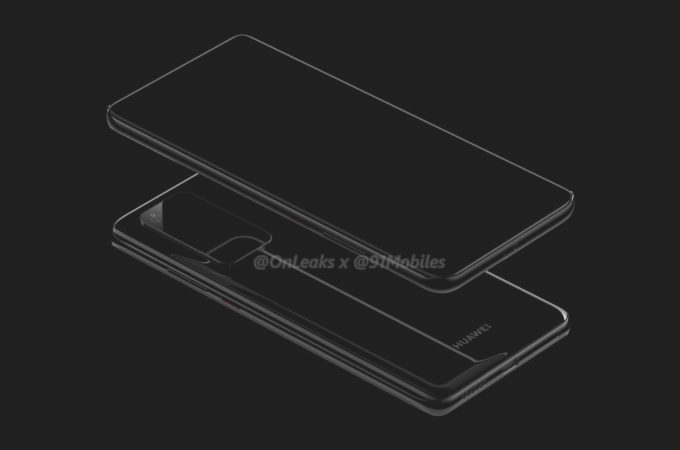 Following the avalanche of renders for the Samsung Galaxy S11 series, it’s now time to have a look at the Huawei P40 and Huawei P40 Pro. @OnLeaks and 91mobiles.com are on the case, having scored probably the usual sketches and designs of the devices, turned into renders.

Last I heard, a Huawei official already confirmed the devices were going to be unveiled in late March 2020, sans Google Play Services. Huawei P40 and P40 Pro both have rectangular camera modules, that protrude a bit outside the case. They also look quite a bit like the cameras from the new Galaxy A51 and A71, perhaps also Galaxy S11 in the future. Huawei P40 comes with 4 camera sensors, in an “L” shape, like the Pro model doesn’t clearly reveal its number of sensors, but rumors talk about 5.

The Huawei P40 also has a glass back and the it’s not very clear how it handles the selfie paradigm. I feel it’s unlikely it’ll adopt a pop up selfie camera, but rather a punch hole one. Probably there will be two holes for two cameras, like on the Honor V30 Pro. Huawei P40 is said to have a flat screen with a diagonal between 6.1 and 6.2 inches. Huawei P40 Pro gets all curvy on all four sides and goes to a 6.5 to 6.7 inch diagonal.

@OnLeaks also mentions that the metal frame on the corners has a new design, in the way the screen panel hooks up to the metal frame. It seems that volume buttons and Power buttons are still here, not replaced with virtual or capacitive buttons. There’s no audio jack, though. Expect in display fingerprint scanners, OLED screens and Kirin 990 5G CPUs. There’s also a crazy rumor going around mentioning a 5500 mAh battery for the P40 Pro, with 50W fast charging.

We’re also very curious if Huawei decides to go to 120 Hz this time around and also opts for a 64 megapixel Sony IMX686 sensor, as rumored.

About Kelvin
Passionate about design, especially smartphones, gadgets and tablets. Blogging on this site since 2008 and discovering prototypes and trends before bigshot companies sometimes
Sony Xperia 6 5G (2020) is Exactly Like You’d Expect It to Be… (Video)   Samsung Galaxy Fold 2 Leaks Big Time, in First Hands on Photos