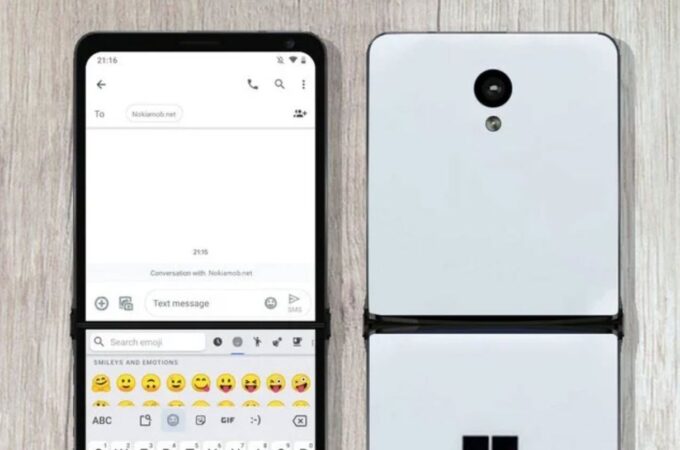 Microsoft Surface Duo came after years and years of leaks of a supposed “Surface Phone”. Many years we thought it was made by Nokia, but it didn’t pan out. Now we have two Surface Duo devices on the market and while the first was a bit of a failure, the second fixed some of the problems. It’s actually pretty enjoyable, once you get used to it. What Microsoft needs now is a third cooler and more compact model.

We see a light gray body here and the Surface logo, plus a singular back camera and a flash, both of them reminding me of the Lumia phones. The line that splits the two screens is a bit of a turn off, especially since it’s a setback from the Galaxy Z Flip series. It also separates apps in two panes and watching videos on the long screen in landscape, with a bar down the middle is a huge problem.

I’m enjoying the back of the phone more than the front, to be honest. The bezels are too thick, the middle bar is a problem and I can’t quite see a selfie camera. A singular camera also doesn’t cut it at the back nowadays.

About Kelvin
Passionate about design, especially smartphones, gadgets and tablets. Blogging on this site since 2008 and discovering prototypes and trends before bigshot companies sometimes
How Linux and Zero Trust Benefit Your Business Together   What are The Best Ways To Grow A Business?