Lately it’s been all Samsung and Nokia as far as phone designs and renders are concerned, so the addition of a fresh Google X Phone pleases us. Created by Jason Chen in Cinema 4D, the smartphone below is made by Motorola, as speculated and it resembles the iPhone a tad. 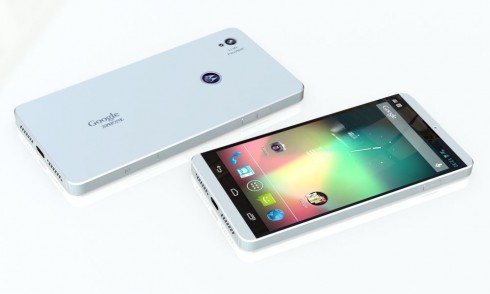 When I say that it resembles the iPhone I’m talking about the lower side, with the microUSB port and speakers. The back of the Google X Phone includes the rumored Motorola logo, that’s said to also be used as a touch area/button. We’ve got a 13 megapixel camera included here, that somehow integrates Pureview technology, although Nokia would never agree to that. One can dream, right?

The handset probably runs Android 4.3 or Android 5.0 and it measures just 7.2 mm in thickness. Its screen is a 4.7 inch Full HD one and this is a 16:9 affair. I would be surprised if there was a Snapdragon 800 CPU inside, plus 2 GB of RAM. Fancy? I like the back of this Google X Phone render more than anything.