The folks of GSMArena, one of the most trusted sources of news on the web have received from a tipster the image you can see below. It’s supposedly a picture of the Motorola X Phone, the upcoming flagship device from Moto, developed with a big Google contribution. 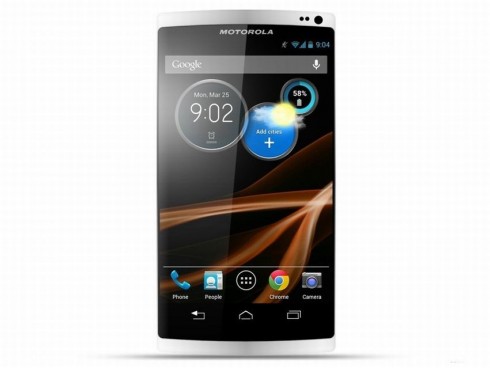 The device is expected to debut at Google I/O 2013 on May 15th and some say it may even end up as a Nexus Phone with Android 5.0 Key Lime Pie on board. Motorola X Phone is expected to use a Snapdragon 800 processor and a 4.7 inch 1280 x 768 pixel display, with an edge to edge setup. One of the best features of the Droid RAZR series, the battery will also be a stunner here, with a 4000 mAh battery present.

The tipster with this leak is saying that this model will have water resistance and dust resistance, plus Gorilla Glass 3 protection. There won’t be a microSD card on board and we may get a touch area at the back of the device, as previously rumored, plus a sapphire glass front. All in all this sounds like a very promising piece of gear, with unique attributes. The question is: Motorola X Phone render or real image?