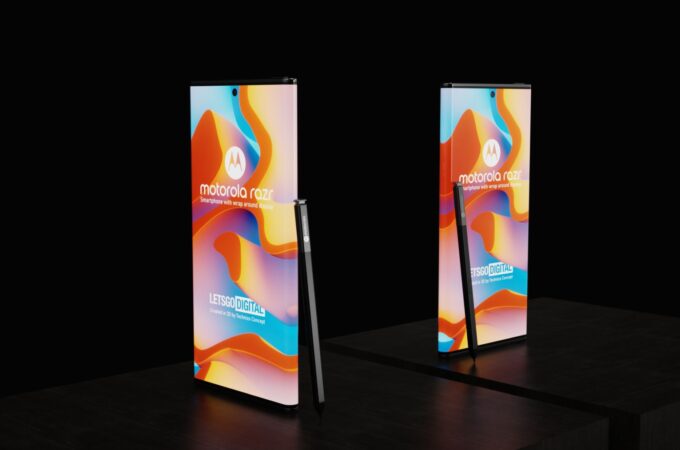 Believe it or not, Motorola is the only other company aside from Samsung who is making stylus phones right now. They’ve got the Moto G Stylus series and while it may include budget phones, they at least have that useful accessory. Now we learn that Moto wants to upgrade things and also offer a wraparound display and a stylus on the same phone.

As usual the patents get turned into renders courtesy of Letsgodigital. The Motorola “RAZR” shown here (name unsure) is a wraparound display smartphone, with stylus pen support, virtual buttons and in pocket detection. It also has a special heart rate detection, which has been gone from phones ever since the Galaxy S series gave it up. These 3D product renders were created by Parvez Khan, aka @TechnizoConcept.

We’ve seen wraparound screens before, particularly on the Xiaomi Mi Mix Alpha back in 2019, when it was called a “Surround Display”. Samsung, Huawei, Honor and Oppo, even Apple had similar projects. Now Motorola seems to be the most serious about it, putting to good use two patents. Back in June 2020 Moto filed a patent with the USPTO, involving a “Unitary pre-formed fascia tension at least two sides of an electronic device housing and corresponding methods and devices”.

The documentation was approved and published on December 23rd 2021 and it mentions how a smartphone with the screen wrapped all around gets made. In august 2021 the company submitted extra info, involving virtual button arrangements, so we may end up with a buttonless phone, which actually makes sense when the surface is all screen. The only button we see is the physical Power one at the top in these renders.

There’s also a pair of speakers, at the top and bottom and a stylus nearby. An under display camera may be used, unless it’s a punch hole shooter. Motorola has already released phones with very curved edges, the Motorola Edge and Motorola Edge+ two years ago, but now the curve has to go further. However, flat screens are making a comeback in the world of mobile, being very much in demand for gaming, so it feels a bit peculiar to see such a concept.

Is there actually any use for it aside from aesthetics?

About Kelvin
Passionate about design, especially smartphones, gadgets and tablets. Blogging on this site since 2008 and discovering prototypes and trends before bigshot companies sometimes
100% Quality and Unique Academic Level Essay Writing Work Plans   Top 5 VPNs for Europe To Use on Your Phone and PC