I simply couldn’t stay away from the hype surrounding #bendgate, the whole craze around the iPhone 6 Plus structural weakness, that makes it bend. The problem is not that the phone bends, but that it does it relatively easily, apparently. And today we get a 9gag render to go with the situation… 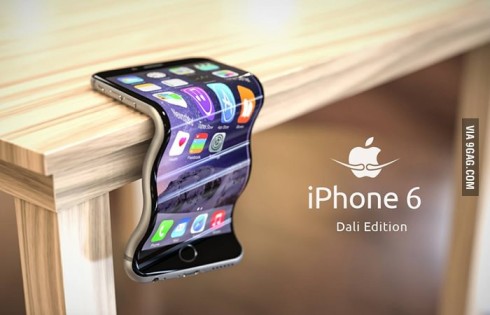 This is the iPhone 6 Dali Edition, an ironic take on the whole situation of the bent iPhone 6 Plus, that was also spotted as a taco lately. The iPhone 6 Plus is a pretty sexy phablet and I can say that having handled one recently. It doesn’t feel indestructible, but also not feeble, unlike what the media has been feeding us. There are two ways to go here: either Apple lets the current models be weak and enhances future units, or they go the “you’re holding it wrong way” and advise us to buy special cases for the handset.

The most interesting part of the bending iPhone scandal is how late it appeared. It’s as if the competition gathered in some science lab and said “let’s take down Apple”. “But how?” they wondered… Then they saw that they’re dealing with a 7 mm thin piece of aluminum and figured out that they could bend that by hand. What do you think?

About Kelvin
Passionate about design, especially smartphones, gadgets and tablets. Blogging on this site since 2008 and discovering prototypes and trends before bigshot companies sometimes
Motorola Nexus X Concept Envisioned by Ramon Rivas   Nokia Asha 400 Just Killed the Walkmans and iPods