It’s been too long since the last iPhone concept, but luckily we have a new one right here. It’s called the iPhone 6 and it was created by Arthur Reis. It sounds more like an iPhone 5S, if you ask me, considering the specs are basically upgrades of the iPhone 5. 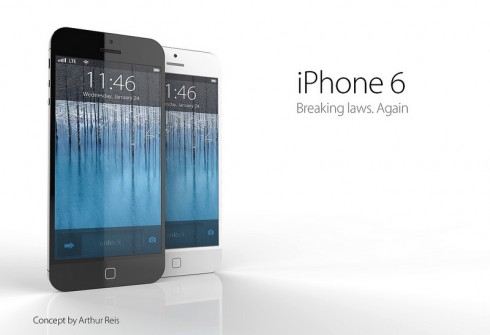 The back design is totally the same as the iPhone 5’s and the front is not that different. We’ve got a new Home button on board and the option to touch anywhere at the bottom of the phone, in order to reach the homescreen. Basically it’s like a Magic Trackpad, one that was mounted on an iPhone. This pretty much cancels the use of the Home button if you ask me.

The iPhone 6 is also thinner than the iPhone 6, by 20%, making it 6.1 mm in waistline. The device is promoted as “everything proof”, as mentioned in the video below. It probably means it’s water, dust and shock resistant an another feature worth mentioning is the 12 megapixel camera at the back with F/1.8 aperture and iSight Pro sensor. Overall the design is not tha different, so these minimal changes make me think of the iPhone 5S…