iPhone Mirage Concept Adds the Little Features that Were Missing

The series of ilounge iPhone concepts continues, with a device created by John Mars, the iPhone Mirage. This handset keeps the original phone’s features and adds a bunch more, specially those that people missed the most from Apple’s device. For example, Mirage supports haptic tactile feedback and comes with a stylus. 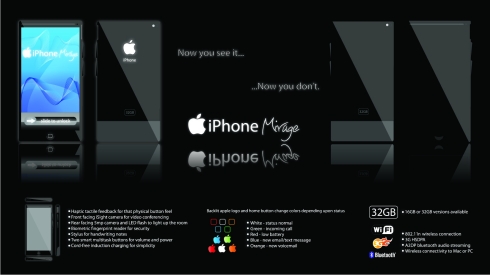 iPhone Mirage also supports handwritting recognition, comes with a biometric fingerprint reader and charges via induction (on the rear surface of the phone). A 1.3MP camera upfront will be handling the videocalls, while the 5 megapixel senzor at the back with flash will take all the cool photos you want.

Finally, zoom will be supported by pinching the screen and the specs list of this concept is rounded up by 16/32GB of memory, 3G, WiFi, GPS and Stereo Bluetooth. Remember that this is only a concept and you won’t see such a gizmo in store too soon.

About Thrystan
Sony Ericsson Phones of 2010 Get Pictured; Concepts of Course, From the White Touch Series   Sony Ericsson K890 Design, Looks Like a Spaceship, Interfaces like a HTC