Nexus Play Tablet is Made by ASUS Again, Costs $99

Ever wanted to spend just $99 on a Nexus tablet? Well, now you can, at least in an imaginary world, where the Nexus Play tablet concept exists. The device was imagined by Gpat and it features some interesting specs and a very appealing price tag of just $99. Pretty cool right? 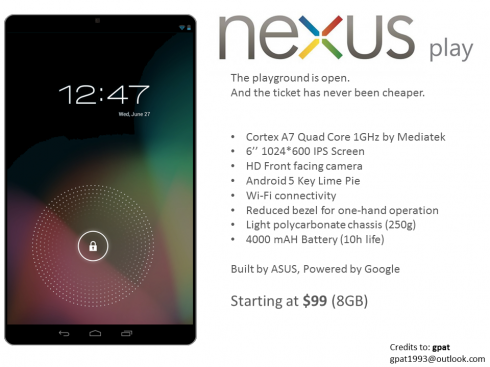 Designer Gpat imagines something out of the iPad Mini book, as far as design goes. The screen seems to be an edge to edge one, with a very small side bezel. This is not your typical 7 inch tablet, but rather a 6 inch device, with an IPS panel and a 1024 x 600 pixel resolution. Inside there’s a Cortex A7 quad core 1 GHz Mediatek processor and upfront we’ve got a HD camera. The OS of choice is Android 5 Key Lime Pie and WiFi connectivity is also in the mix here.

The reduced bezel is meant for better single hand operation and the chassis of the slate is very light, made of polycarbonate. The slate weighs 250 grams, has a 4000 mAh battery, good enough for 10 hours of life and the device is stil built by ASUS. Fancy this device?