India’s favourite phone, the Micromax Canvas 2 is preparing for a follow-up and you previously saw the Canvas 3 pictured here and here. Today there’s a brand new design and set of specs, courtesy of Rohan Shankar, who has a high end vision on this device. Let’s see what his ideas are! 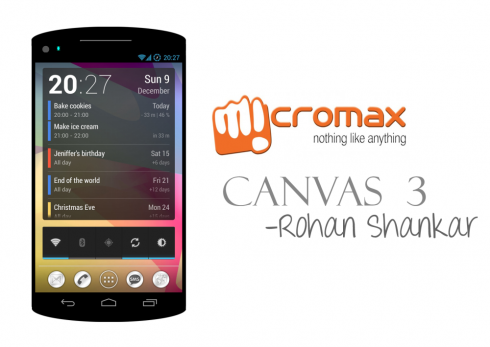 The smartphone has the same 5 inch screen as the Canvas 2, but this time with an improved resolution and different screen type. The Micromax Canvas 3 is designed using Photoshop CS 5, for those of you wondering how it was done. It is supposed to run Android 4.2 Jelly Bean on a quad core CPU and use a 5 inch AMOLED display with a 1280 x 768 pixel resolution. It also relies on an AVEA engine for the display, 1 GB of RAM, a 13 megapixel primary camera and a 2 MP secondary cam.

Finally, there’s Full HD video recording, dual SIM ability, 8 GB of storage and microSD expansion for up to 64 GB more. The designer reminds us that these are not the final specs of the Micromax Canvas 3, so we shouldn’t take them seriously. The price is rumored to be somewhere between $188 and $282. What do you think? How will the real product be?