After the Micromax Canvas 3 concept published on this site we received yet another render of the same follow-up to the Micromax A110 Canvas 2. This new one is done by Ram Bahadur Diwan, mechanical design engineer. Since the Canvas 2 was a dual SIM phone, I also expect this model to have dual SIM slots. 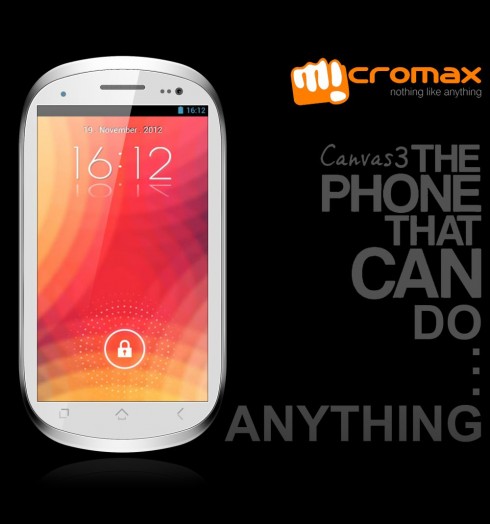 Since the designer didn’t provide us with specs, I will speculate regarding them. As far design goes, the Canvas 3 reminds me of a lower end Nokia Lumia or even a Nokia Asha, for some reason. The lower side with the capacitive buttons actually looks fashionable, I have to say. Considering the Canvas 2 had an IPS LCD 5 inch screen with 480 x 854 pixel resolution, it’s probably time for an IPS 720p panel with the same diagonal. The RAM should also be upgraded from 512 MB to 1 GB and the camera could stay at 8 MP.

The CPU inside the previous model was a dual core MediaTek MT6577 at 1 GHz, but the newcomer could be a new generation dual core Mediatek unit, or maybe even a quad core one. Finally the Canvas 2 had a 2000 mAh battery and I’d be happy to see a 2500 mAh battery on the Micromax Canvas 3. What this phone has as advantage is the feeling that it may sit very nicely in the user’s hand.