You can’t be following the latest trends without dressing properly and without owning a hip cellphone. Trendy becomes extremely cool with the aid of the Benq-Siemens Cameo handset, that’s only a concept phone, but it comes with a brilliant idea. Cameo supports digital customisation and can even turn invisible, if you want it to. 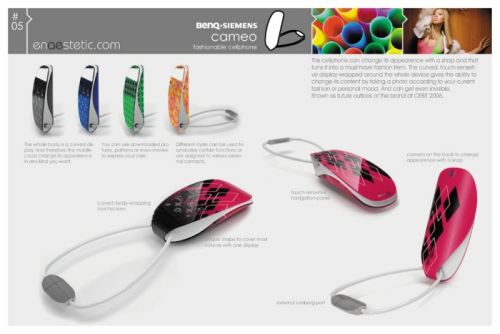 This Benq-Siemens conceptul wonder, designed by Nils Siegel can change its appearance with the aid of a curved touch sensitive display, that’s wrapped around the device. Cameo manages to change its color by taking a photo and adapting to your current clothing style or mood. So, if you’ve got a purple dress and you’re in a purple room, you might not be able to see the phone, as it’ll turn purple, too.

Now, where can you find a purple room?