First of all, nice soundtrack for this Android 5.0 concept mockup and second really, really nice ideas! We already know that there’s Android 4.4 KitKat coming in October and now let’s look at Android 5.0. 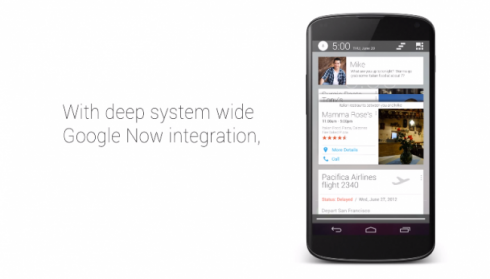 Craig Tuttle is the author of the video and he’s the one to give kudos to here. He actually created the vid before Google announced Android 4.4, so he imagined this to be the next release. The designer seems to believe that the future of Android involves serving the user information without having to ask for it. Google Now is at the core of the experience and an advanced predictive search mechanism.

Google Now gets system wide integration and is even found in the messaging area. There’s a new multitasking system based on stacks, that I fell in love with instantly. The stacks idea makes me think of the new 3D tabbed browsing in the iOS 7 Safari. Also, you should notice that the UI went from a dark Holo to a lighter coloring. What do you think?