It appears that you liked very much the Galaxy Nexus 2 concept, that went viral on Facebook and Google+. It received 100 likes, over 30 shares and over 20 Google+ +1 votes. Now this device inspired our often quoted designer Bob Freking to create his own vision of the Google future. He imagined the “Android K with Nexus”, shown through a teaser below. 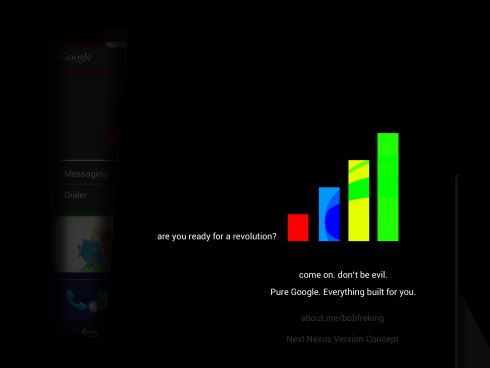 He promises that the next concept will be a mixture of software and hardware. Bob held Jelly Bean in his hands and has a good idea of what it’s about. He claims it’s perfect and says it’s hard to improve something so polished. Well, he has a few ideas, applied to what looks like the new Galaxy Nexus phone, in his vision. He is still thinking about the concept and gathering ideas, so suggestions are welcome as usual.

I imagine that Google will launch a new Nexus phone with Android Key Lime Pie, that’s what the K stands for this time. So, either Bob Freking imagines the phone of the next Android release or the 2013 Nexus handset. Having seen his next teaser, I can reveal this The Google Nexus 2013. Are you ready for it?